The idea of sharing here the random pieces of art that I had loved, is solely and shamelessly stolen from the Global Art Junkie. But fans have their own dirty rights of interpreting/copying/stealing their idol’s ideas. I ardently believe what Mario Ruoppolo told Pablo Neruda in one-of-the-most-beautiful-movies-of-the-world named Il Postino, as the poet accused him of seducing the fiercely pretty Beatrice with sly uses of his verses: Poetry doesn’t belong to those who write it; it belongs to those who need it. However, I cannot at the same time deny that I have somewhat been meaning to do this for a very long time. So many scraps of papers – smeared with paints, strokes, words… Some lovingly presented, some carelessly left at, some taken notice of only by vague chances.

What makes this essentially different from a general post about art is that I know these artists personally. None of them are anywhere close to professionals, but just forced to have sat and produced something out of a sudden whim that has been almost uninvitedly bothering them beneath their pituitary gland for a while. Thus my judgments, or rather emotions towards their work are very personal, as I believe it is indeed so, admitted or not, for any art appreciator living under the sky.

My first advertisement of one of those artists dear to me: 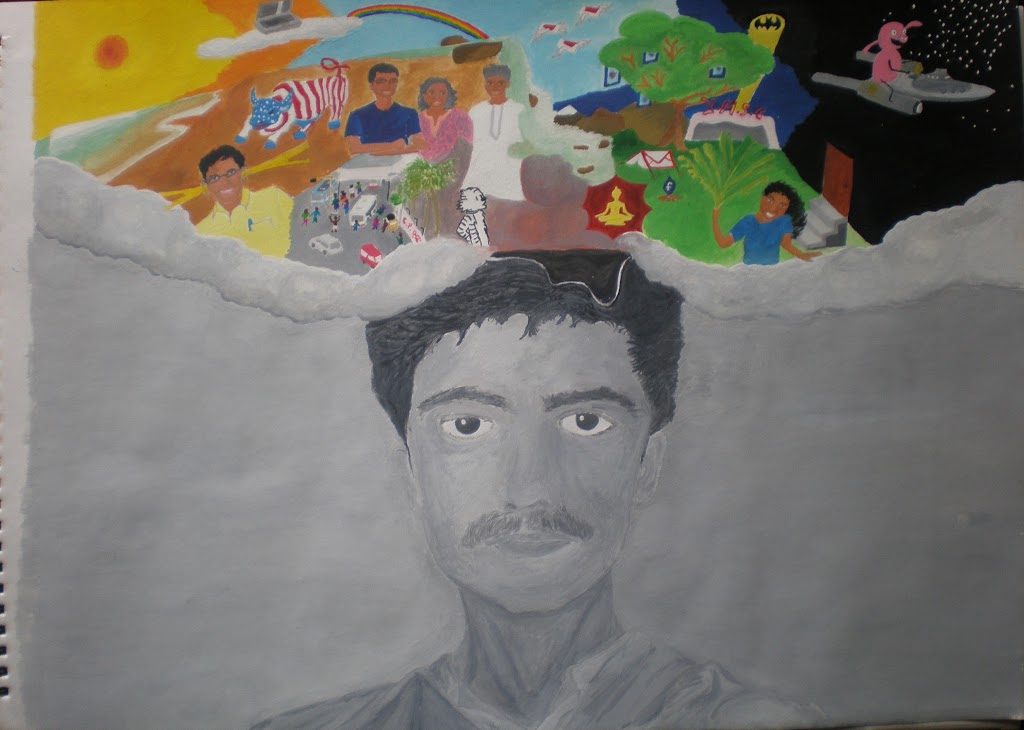 This is “Eyjafjallajokull” (the volcano in Iceland that was erupting just then), the Cracked Skull of Tejas Kalelkar. A unidimensional mathematician, a religious follower of jerky web-comics, a biker, a talker, a trekker, a meditator (specializing in Suryanamaskara that involves bending one’s body in certain queer positions for the entertainment of the viewers), an occasionally-aspiring-but-often-given-up-on-his-talents painter, and a friend. This is his second attempt ever to make a painting. His blog, where he writes down his thoughts once in a while can be found here.