About-Dance and Theater, Angels and Demons

This one here is an old travelogue (and quite a concrete one too, unlike the metaphysical crap that I usually come up with). It was kindly and surprisingly accepted and published in a web magazine, but without the photos. I was already guilty of the regular sin of promising but not sending the photos to the Koothu-artists, who baffled and impressed us beyond expression on that day at Thirukkurungudi. I did not want to make my conscience heavier by ignoring them even as I started a blog of my own! Hence this.

It was just the four of us, who had the opportunity to perform a Mohiniyattam recital along with our guru Gopika Varma, in Sri Azhagia Nambi Rayar temple at Thirukkurungudi. Rarely have we felt so blessed to perform, rarely have we had so much fun together.

Thirukkurungudi:A mouse-click can lead to the ancient village of Thirukkurungudi. Located in Thirunelveli district at the foothills of the Western Ghats, its history dates back to more than a thousand years. Azhagia Nambi Rayar temple is at the center of the village, in a geographical as well as an emotional sense. It is one of the 108 Divya Desams, sacred Vaishnava temples, according to the myth. In Tamil language the word ‘Nambi’ means personification of all virtuous qualities blended with beauty and grace, which is to say Lord Vishnu.

It was a week before Gopika Chechi asked us to get ready for the performance. I, personally was clueless. Coming from West Bengal just three years back, I am still struggling to catch up with the 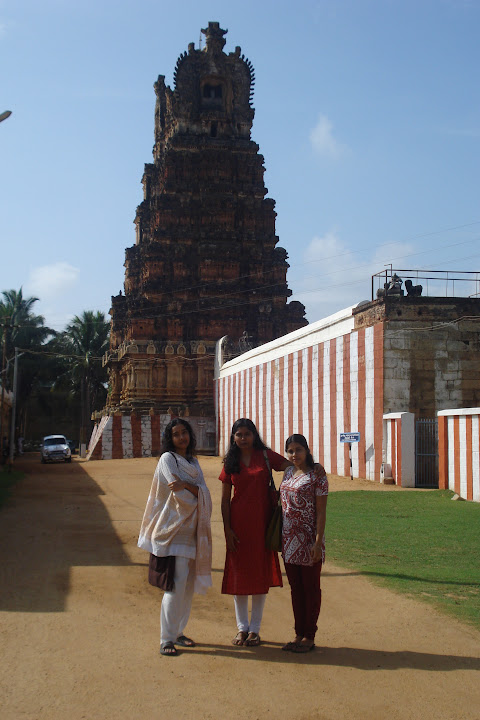 temple-oriented culture in the southern part of my country. Back there we used to hang out in cafes or theaters. Okay beach…..of course I understand. But temples! I mean who goes to a temple to relax and have a fun time! What kind of a girl puts flowers in her head, bhvasma on her forehead and goes around in public without feeling disgustingly feminine! …to start with that was my take on the Chennaites for a few months. Soon to my own surprise I found myself in my spare time sitting in a temple reading or just vaguely listening to the old ladies chanting or muttering while making garlands in front of the deity. I was even buying flowers and stealing the powdered ash from the bowl kept in temples and putting them up, trying not to be seen by people who might know me. All the same I was quite ignorant of this particular temple of which our guru spoke so enthusiastically. But it was a program organized by Anita Ratnam. And of course I knew Anita Ratnam. Whoever has stepped into the world of dance and has not known her work! I have been a fan of that tall lean figure of hers since forever. Sri Azhagia Nambi (among the five Nambis in that area) was her family deity. The day of the performance was the Ekadasi day of Sukla paksha Karthigai. But much more than a performance in an ancient temple, or seeing one of my idols up close, was waiting for me, for all of us.

The adventurous beginning: We had to take a train from Chennai Egmore station on 16th November evening. The day was a hectic one. I had to attend a couple of classes, pack my bag, which I as usual kept for the last minute, and catch the train at 5:15. When I was finally ready to start for the station around 4 (it takes about forty five minutes to reach the station from my place) I looked outside. It was the moment before the advent of Matsavatara! In a couple of minutes it started pouring down. I was not pleased with Sri Nambi Rayar’s sense of humor. I had two hundred rupees in my pocket and Chennai Autowalas have never been famous for their generosity. How I reached the station partly covered by mud, changing local trains (which were all delayed), jumping over a fence at the station Fort etc deserves to be called a story by itself. But I definitely wish to emphasize the fact that I was the first to get onto the train and thus successfully capturing a window seat, one of the most desired things in my life.

Our shelter for the day: We reached Valliyur, the nearest station to the village, early in the morning just when the sun was about five inches above the horizon and the wind was velvet-soft. It was a dawn after a night of disastrous rain. The effect was so refreshing that we fell in love with the place at once. We were picked up from the station and placed in one of the Agrahara Brahmin houses next to the Azhagia Nambi temple. Agraharam means a garland of houses. Basically they are built around a Shiva or a Vishnu temple, resembling a garland. In his “History of Tamils from the earliest times”, P.T.Srinivasa Iyengar (1929) wrote

The houses had in front of them, a shed with short legs to which were tied fat calves; the houses were washed with cow-dung and had idols (inside them). Domestic fowl and dogs did not approach them. It was the village of the guardians of the Veda who teach its sounds to the parrots with the bent mouth. If you (bard) reach (the place), fair faced bangled ladies who are as chaste as (Arundhathi) the little star which shines in the north of the bright, broad sky, will after sunset feed you on the well-cooked rice named after the bird (explained by the commentator as the rice called irasanam) along with slices of citron boiled in butter taken, from the buttermilk derived from red cows and scented with the leaves of the karuvembu, and mixed with pepper-powder, and the sweet-smelling tender fruit plucked from the tall mango tree and pickled… 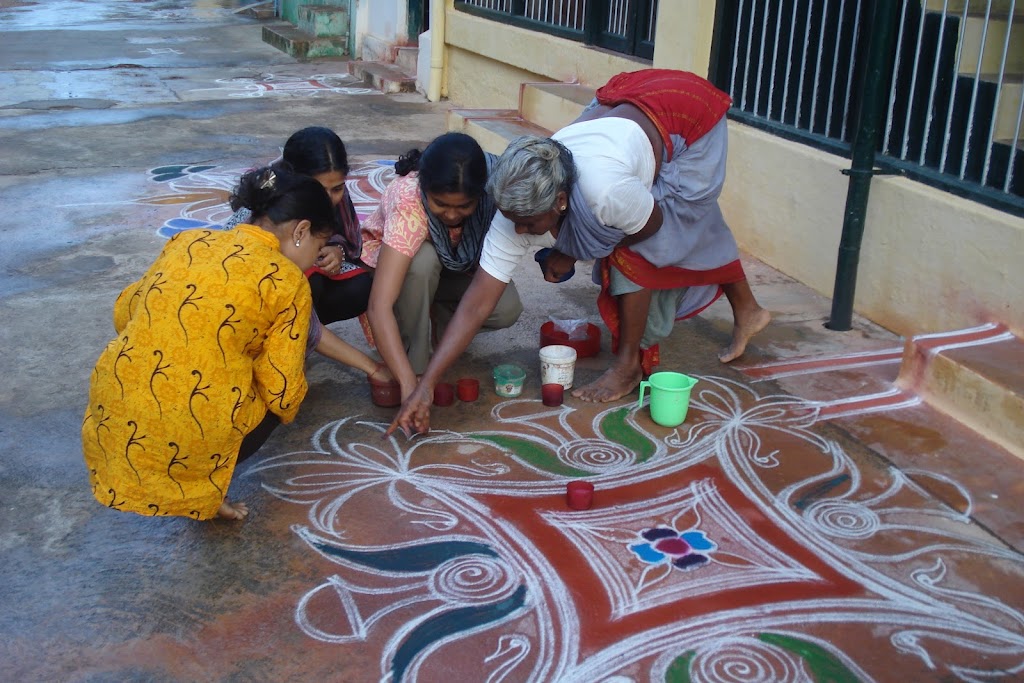 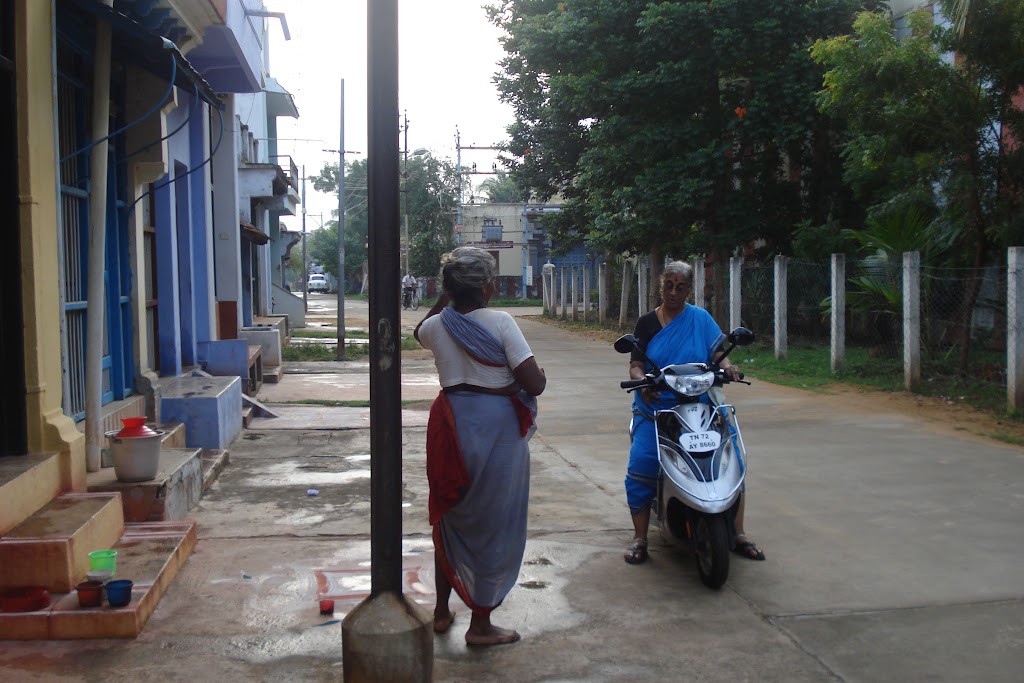 We on the other hand found a lamp-post in front of the house we were in. Surprisingly street dogs indeed were not to be found. But neither were parrots. However we were so amazed to find ourselves in such a beautiful traditional house that our chattering might have surpassed that of any species of bird. Starting from the vertical grills guarding the red porch in the front, the high ceiling supported by thick wooden beams, the narrow passage behind the house leading to the bathrooms (which among other things had a geyser!) to the huge trees in the spacious garden at the back, each and everything seemed fascinating to our city-clad eyes. We found our Arundhatis in the two white-haired ‘mami’s. One of them endeared us by her Kolam skills, where as the other one impressed us thoroughly, whooshing off in her two-wheeler after a short exchange of greetings.