However, none get girls!

This is a solemn tribute to all my researcher friends, who did not 🙂

This is also my way of showing respect to the great Saturday Morning Breakfast Cereal.

Octavio is one of those totally involved hardcore mathematicians, with whom the first handshakes are always heavy with the weariness of having to touch a super intelligent alien from the ultra whateveritis galaxy. A PhD. student in Saarland, Octavio is on the verge of submitting his thesis within an obscenely short time period of two years since he began.

He is from Mexico, inheriting a brain full of complicated logic, coming from a family of lawyers. And he intends to learn German by watching German movie every Tuesday evening, without understanding ninety eight percent of the dialogue. But then the ways of super intelligent aliens are bound to vary from the common.

Within a few days I came to know that he was a footballer, and a painter too – thanks to Moritz Weber, a disciple painter under Octavio, working in the same department in the university. And while Octavio’s work in mathematics often brushed past my skull, without leaving a trace of understanding, I was much engrossed by the vibes of the tiny paintings of dark silhouetted buildings against yellow evening sky, made by him as a gift to Moritz. I was curious to see more. It was an ideal opportunity once John and I were invited by Octavio, Carlos and Barbara to visit their sixth floor apartment over an excellent Mexican dinner with chicken cooked in orange juice by Carlos, yoghurt pelted with apples by Barbara and red wine. 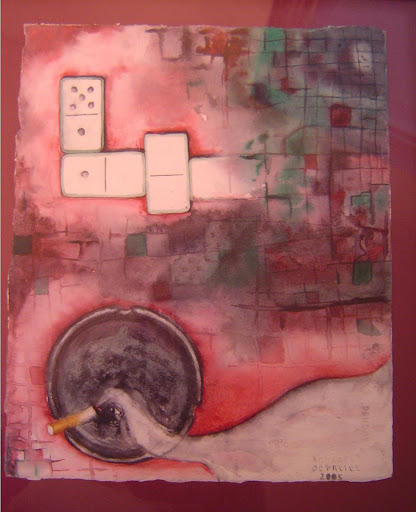 The above is one of my favourites of his. I am worse than a novice when it comes to water colour, but it is not just because of his skill; what attracts me most in this, is the impression of a conversation that just came to a halt as I intruded in it. Once it feels like it was just a mellow correspondence, the next moment – an intense plot… 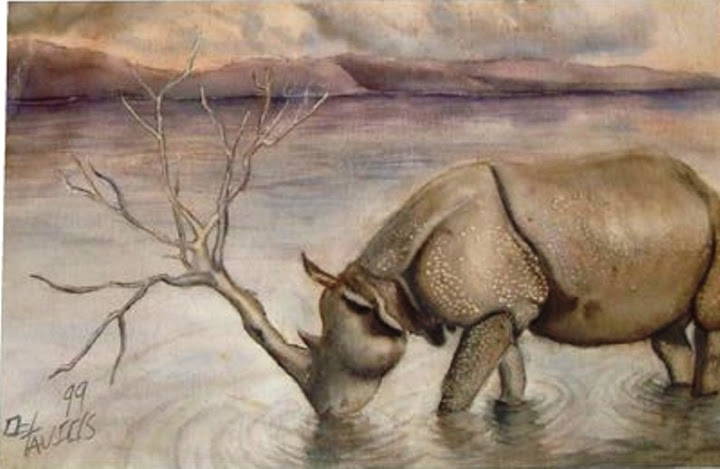 I wish I had a copy of better resolution of the above painting. If he had told me that he really saw a rhino pushing a dead tree with his horn in a silent marshland, I would have believed him. But then if he had said that he saw in his dream an mountainside river with evening looming in, and later copied a rhino out of a children’s book of animals just to decorate, I would have believed him too. Point is, it did not matter, the effect was overwhelming…