”Preethi pulled Chandana into her circle of obsession and in turn acquired Chandanas’s stable serenity. She countered Chandana’s proposition of an abstract definiteness with a frenzied narrative of familiar gestures”… it was when I wrote this line I simultaneously realized that I was increasingly sounding like a football commentator gone slightly askew in her mind, and that it was really three whole hours that had passed since I came in. It was not an extremely intense technique-based three hours. Rather cornily, it felt like a fun time that allowed both a bit of work and a bit of gobbledygook, and finally seemed to get over before one would like it to. The genre of fun might have had a shade of the obscure, or more appropriately a hint of uncertainty. But that might have been the whole point of the session –one that probably made each participant think, search and improvise beyond the grids of the auditorium of the Alliance Francaise of Madras.

The ongoing rant is about the 3rd Improvisation Session that took place on October 1st, 2012, organized by basement 21, a platform presenting the ‘contemporary’ in art. It involved a group of musicians, dancers, theater-artists and painters –encouraging them to collaborate in arbitrary pairs and later in larger groups, to connect and communicate through their personal tools, techniques and temperaments (be it a violin or a body, a text or a canvas, a voice, a wish, a reluctance, an itch…). The broad goal was to smudge down the lines between those unfamiliar forms. But more locally, it was about learning to watch, hear, or just sense the presence of another person, irrespective of the apparent gap in their performance languages, to the point of being able to instinctively predict what the other person had in stock to express –a joint exploration of mixed media.

Not that one always had the right amount of time. The 3rd improvisation session allowed a pair of artists three minutes for a basic initiation and a mutual appraisal of style and temperament, followed by a short discussion and possible corrections, both by the artists and the audience (each of whom was encouraged to participate in the performances). Finally it was a full five minutes for them to explore where they left it, or to build something afresh. The time was not always practically sufficient for the duo to settle in, have a feel for one another’s responses and then fully explore the extent of that partnership. But in some sense it brought out the need for crispiness and quickness of thought for an improvisation to click -it was a research of the present, not supported by, thus also not burdened by a compulsive past or a future.

For me it was the first of that sort, for whatever I had composed till then as a part of a group of performers, unless it was an accident, always lacked a spontaneous common language within the group. They had either been blind pursuits of a mastermind, or juxtapositions of several isolated singly-processed fragments, since it had been easy that way; but as is known, and as it was mentioned and seen repetitively during the October 1st session –what was easy was usually what was to be avoided.

The following shows that I have unknowingly switched from my football commentary mode of writing to Saturday shopping:

A. inflexible pre-determined thoughts about a middle, an end, or for that matter even a beginning,

B. certain popular formulas that tend to limit the artist to her own form,

C. suddenly losing the sense of the partner,

D. continuous exploration of new moves, leaving no space for anything particular to settle in,

E. doing what was easy. 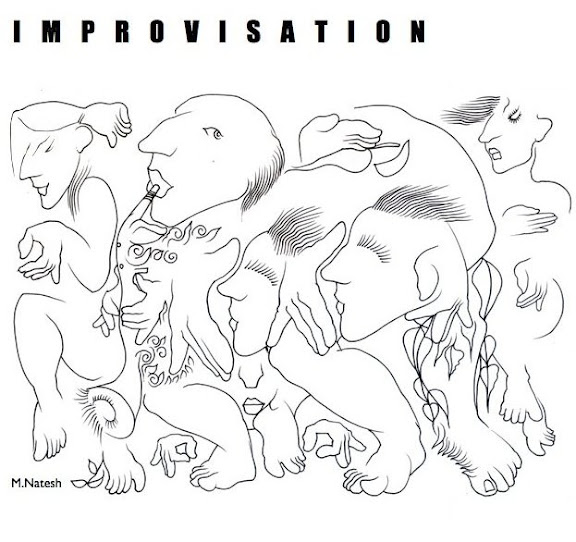 It started with a warm up session focusing on development of sense of space. The term ”space” in contemporary art is always intimidating to me, but colloquially that exercise could be translated as not running into one another when there were many of us walking on a stage, and at the same time trying to fill the whole arena with a uniform distribution of bodies. But more interestingly, it was about evolving a technique in order to achieve a gradual and complete halt, learning to appreciate the apparent absence as another way of defining presence. (I secretly enjoy this part of contemporary dance or theater workshops for a completely different reason –as it always ends up in a pandemonium of giggles however seriously it began; but then, slapstick is easy –I guess.)

The assignment for each pair was to suggest a proposition and to counter it as well as coming up with a new proposition at that process. Ranjith and Anoushka -musician and dancer, were the brave inaugurators. Though they fell out of one another’s sphere of thoughts in the shorter session, a brilliant moment of tension emerged at the latter session, when Anoushka started to respond to the rough, twitching chunks of sound produced of some thoroughly inappropriate uses of Ranjith’s violin, through her meditatively squeezing fingers –both artists posting themselves at intelligently chosen points within the stage, which by itself was creating a dialogue of one kind. An idea came out through the discussions that followed –one that I found really intriguing –was not to counter a proposition through a movement or a sound or an expression with that same tool, but with something as different and abstract as the space. Particularly while an artist who was comfortable with the space, was working with one who was not, even the non-deliberate proposition of uneasiness of the latter could be played with the expertise of the other as a deliberate counter proposition. 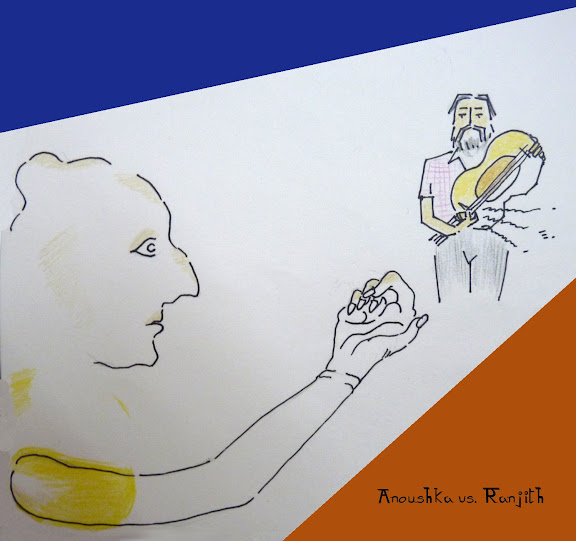 Each of the other pairs came up with something that was interesting in one way or the other. Dialogue versus movement, silence versus noise, willingness against indifference, pathos answered by ridicule -expressions, gestures, moods were constantly and often desperately seeking for openings to both oppose and mingle with one another. I (probably all of us) personally found the pair of Ramachandran and Maarten engaging –a duo of a painter and a musician. Somehow to me, at certain points their work really reflected the crux of improvisation, as they cajoled, exchanged and rejected in turns, complementing each other, from a deliberate mood of hesitation to an active participation into not playing the saxophone, not painting the curtains hung from the high ceiling in crazy ripples, but indeed generating an internal signal, that one could not really decode in so many words but that held the audience erect almost till the end. The common trend of the day was a tendency to take refuge within a narrative of the opposites, which indeed became intense at certain instants. But strangely enough, the moments of extreme tension were not those, but ones that would be labeled as total abstract such as a game of static and discreet robotic hand gestures as against a heavy fleshy inhalation floating around the space; or a trapped body of a dancer scratching, pulling and failing to break through a wall as against the susurration at the opposite wall created by a poet sitting in an almost daring silence, shaking a pair of maracas, but none of them really trying to fill in the emptiness in between. On the other hand some of the suggestions were lost on the audience due to lack of slowdowns, reproving the importance of the initial exercises focusing on the cycle of movements and halts. An artist had to know the right amount of elasticity of her moves, more would be dragging, but less would cause a crash -like a drive through a highway.

I was as usual trying to look invisible but Preethi and Krishna fished me out. However at this point I refuse to lose my advantageous position of a learned critique by going into those few bewildered minutes. The best question raiser among the first timers was a cute young singer, asking if she should really sing or just create cacophony, since the rest of the artists were using their tools of expertise in such distorted ways that she never was aware of as valid means. After Praveen assured her that it was ”also” allowed there to sing well, she grew more confident and reached a closer level of comfort with her partner. In fact interestingly, she chose to force her partner into changing her propositions several times by trying to counter her with refusals and delayed imitations; though if it was a feud, her partner Akila was way too experienced an artist (dancer/singer) to be intimidated.

Actually her question is crucial if one wants to find a concrete goal for pursuing contemporary art, in order to reach out, or to be understood by an audience. Abstraction is one of the firsthand tools of contemporary art; but if the artist is not cautious, the abstract can, and does either end up into pure jargon, or tend to take it easy into the well-explored zone of the narratives, often humour. The challenge is also to break out of such tendencies.

If art is a quest to discover subjects of expression and to invent as many modes of expression as possible for each of such subjects, then the path led by basement 21 appeared to be the obvious one to take. The same inspiration that made us combine musical instruments to create an orchestra has made the idea of combining distinct mediums of performance and visual art forms attractive to artists. What we did at the session was not a path breaking production or even a formal workshop leading into some concrete insight. But to any artist, it would have been a natural step towards achieving a broader consciousness of ways of creating. To me it came as a starting point for working in a mixed group, or even for applying other art forms in my own work (at this stage I am shifting to hypothetical mode of writing, judging by my schedule for next few years, focusing on constant non-productivity). Moreover, in spite of the time constraint, it gave one a chance to create art in a like-minded atmosphere, to an extent open to any form –not really a treat that artists experience every other day. Besides, the scope of simultaneous interaction with the partner and the audience broke into the concept of proscenium, adding one more dimension to the performance arena.

After all when two artists are improvising, it is the surrounding, both the living and the inanimate that contribute to whatever is being created. A part of it is based on chance (such as right when the poet recited about the sparkling stars in the night sky, the spotlight shone on her partner’s nose-stud, blinding me for a second). Another part is based on both the partners’ willingness as well as the willingness of the audience to participate in this cooperative venture. But the rest of it, and that goes for any art form –be it classical or surreal –is based on technique and experience that can only be developed through working relentlessly for oneself and along with as many others as possible.

Sometimes the sphere of just one presence is a performance by itself, countering almost everything that is. 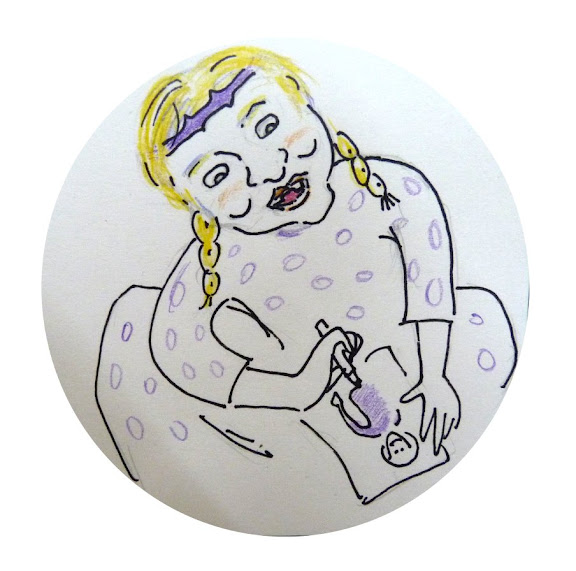